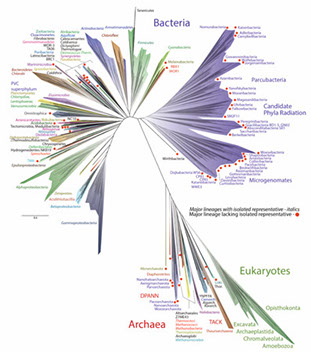 A new view of the Tree of Life (Hug et al. Nature Microbiology, 2016) in which red dots indicate phylum-level groups without even a single cultivated representative. Genomes from organisms belonging to such lineages were reconstructed from metagenomes

We are acquiring huge genomic and transcriptomic datasets from entire microbial communities from across Earth’s environments, targeting systems that often include microbes unrelated to laboratory-studied species. The datasets are searched to identify new enzymes that may be involved in DNA manipulation. We are establishing assays for determining molecular activities for these enzymes, including DNA and RNA binding, unwinding, and cleavage.

Genomic exploration of bacteria and archaea that are only distantly related to known species is uncovering a vast diversity of novel genes and gene clusters with potential value in biotechnology and medicine. Of specific interest are genes that could be developed into genome editing tools. The existing toolkit for human genome editing could be dramatically expanded through exploration of new CRISPR-Cas proteins that have yet to be characterized, and via the development of enzymatic tools to enable controlled repair of DNA breaks. Research to uncover such tools is being conducted with Prof. Jennifer Doudna and her lab and is funded by the Innovative Genomics Institute and NIH. 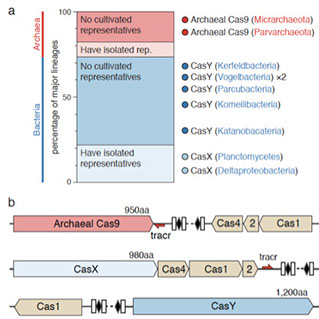 Currently, our focus is on newly described CRISPR-Cas systems (e.g. Cas14) and DNA interacting proteins that occur in conserved genomic context. The research will lead to new insights into the functions of known proteins within CRISPR-Cas systems, and will likely uncover new kinds of proteins, enzymes and transcripts that contribute to genome surveillance and manipulation across the microbial world. This will lead to a much larger toolbox for genome editing than is currently available, enabling researchers and clinicians to optimize technologies according to their needs.